NOTE: This game can be played directly in Windows using an unofficial engine recreation (see the links section below).

It is 95 years after the first Syndicates fought for control. An oppressive peace has reigned, but the controlling Syndicate, EuroCorp, hasn't been idle. As well as upgrading the computer control Chips embedded in peoples' brains, they set up a research team to find out how the Syndicate can utilise more of the brains they control.

Based in Reykjavik, Iceland, for the purposes of secrecy, C3 (the Cybernetic Cognition Conference) was a group of ten top scientists carrying out experiments into mind-expansion. If anything, they were too successful. By trying out their newly-acquired mental enchancement technology, nine of the ten C3 members drove themselves insane. Nevertheless, they saw the repression of the Syndicate and decided to counter it by setting up the Church of the New Epoch, dedicated to breaking the shackles of their erstwhile employers, the EuroCorp Syndicate. Only one member of C3 resisted the madness of total understanding, and broke out of the group to head off on his own. He is called Ko-Paull Vissick.

The Nine, as they were now called, became determined to overthrow the Syndicate by recruiting people to their new religion. Their thinking was so advanced that they compiled it into a large document called the Codex, along with theoretical designs for an entirely new system of weapons, far in advance of anything that the Syndicate possessed.

The first thing the Church did was to introduce a computer virus into the UTOPIA global control network which the Syndicate uses to 'guide' the population. Chips failed in their droves, and suddenly the masses saw the world for what it was. The Nine were there, ready to snap them up into the Church of the New Epoch. Their Indoctrinators, the Church version of the Persuadertron, were virtually overheating with the numbers of new converts they were attracting.

Thus begins the war for the minds of Global Asylum Earth. The Church are arming their disciples with ever more advanced weaponry and the Syndicate are fighting back with highly-trained troops and upgraded vehicles and weapons of their own.

The Syndicate simply want to restore order but the Nine, being clinically insane, have a master plan...

And what of Vissick, the tenth member of C3? He knows what the Church is planning and he's aware of the approaching Cataclysm. But he's no fan of the Syndicate, so he won't throw in his lot with them. In fact, he's leading a group of free-thinkers to their own destiny. Known as The Unguided, they have their own ideas about the future of the planet and they, too, are willing to fight to the death for them. So here you stand, on the brink of a New Epoch. Which side will you take? Do you think you have a chance of winning? The Syndicate Wars have begun. 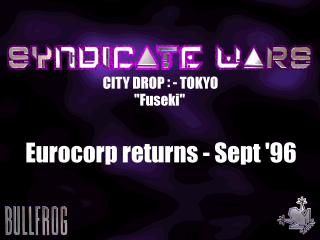