You can play Syndicate on this website so you don't need to download and install the game on your computer. We recommend to use Google Chrome when playing DOS games online.

To install the demo from syndemo.zip:

As the world's multinational corporations grew, their profits began to rival those of small countries. Soon they owned small countries and corporate influence was felt at the highest level of world government. Then, a European corporation perfected the CHIP. Inserted in the neck,the CHIP stimulated the brain stem to alter your every perception of the outside world. Better than any drug, the CHIP gave hope to millions by numbing their senses to the misery and squalor around them. The CHIP was a technological revolution and sold countless units with the slogan "Why change your world when you can change your mind". It also left the user open to auto-suggestion, and gave the corporations the perfect tool for manipulating the populace. Soon the corporations were at war among themselves, desperate to monopolize CHIP manufacture. It wasn't long before the Syndicates became the controlling force all over the globe.

As a young executive in a small European Syndicate, you're looking to make your mark. You observe from a control platform in an airship high above the teeming city streets as your agents, controlled by CHIP technology, spread the shadow of your terror. Each mission takes place among the canyons of concrete and steel, the mazes of streets and sewers, that our cities have become. The population goes about its business, moving among the traffic, commuting on trains, rushing to and from work, unaware of the violence about to explode around them. 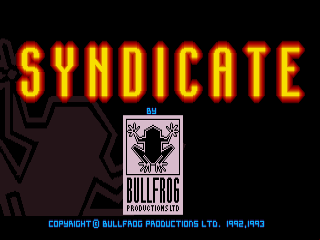