Tank Wars is a shareware game for two to ten players based on the same ideas as Artillery and it's more well known cousin Scorched Earth. Any of the players can be computer controlled and there are seven different styles of computer opponent. The game can be played by keyboard, mouse, and the length of a match can be set between one and ninety-nine games.

The players command tanks that are placed on the randomly generated landscape. Across the top of the screen are the controls that select the angle of the shot, the power of the shot, the kind of weapon being hurled as well as information showing who is firing, wind direction and wind speed. At the end of each round players who successfully destroyed competitors can use the points they scored to buy additional weapons, there are eighteen different weapons in the game together with two guidance systems and three defence systems.

The game has many configuration options which change the way the ground crumbles, what happens if a shot goes off the screen, whether shots and/or their trails are visible and much more together with a team play option. The game has sound and it is optional. 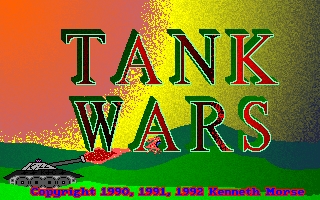