You can play TecnoballZ on this website so you don't need to download and install the game on your computer. We recommend to use Google Chrome when playing DOS games online.

TecnoballZ is a ball-and-paddle brick-breaking game that was originally developed for Amiga computers as a successor to an earlier game simply called Tecnoball. The main distinguishing feature here is that the player does not collect powerups and bonuses from broken bricks - instead, they are purchased in shops between levels using credits that have been accumulated in during play.

Additionally, the paying field has pockets in all corners, which can hold the ball for a while if it gets there, then release it in a random direction. Getting a ball cornered this was gives the player some extra points and allows to take a breather from fast gameplay.

TecnoballZ was originally bundled by TLK Games as a free compliment/bonus with shareware titles that they sold. In the early 2000s, the full DOS version became available as a free download from TLK Games website, and in 2004 the game was ported to Linux, with both the game and the source code released under the GPL license. TLK Games also restored the original Amiga version (which has background music and digital sound effects in contrast to the DOS version) and the Amiga AGA port and made them available for free as well. 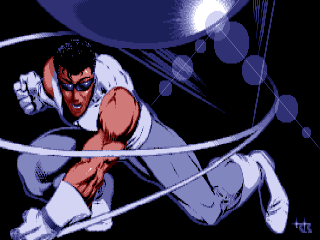