You can play Telengard on this website so you don't need to download and install the game on your computer. We recommend to use Google Chrome when playing DOS games online.

Nobody knows who built the great underground labyrinth called Telengard. Some say that the souls that perish there feed some unspeakable demon. Others say that it is a testing ground for wizards and warriors.

Even the most seasoned of fighters sometimes do not return from the nether-most levels of the dungeon. But, like gamblers, even the most successful adventurers return again and again down into the circular stairways and tomb-like corridors of Telengard, risking their very lives for gold, treasure and magical powers.

The sunken levels of Telengard are as ancient as the dragons and trolls that roam them, as modern as its noiseless elevators, as advanced as its teleport booths. Its very existence is a mystery; its owners or creators are unknown.

It is an enigma, a maze, a treasure chest, an arena … and it is also a quick death for the unwary. 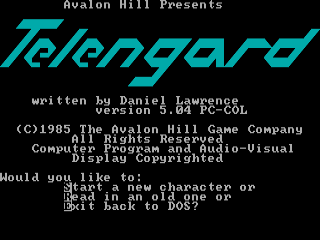