This is a liberated game: it was originally shareware, but in 2007 author Owen Thomas generously released the full version as freeware.

The Empire is under attack. Rebel forces have hijacked government nuke-pods and secured them deep underground in heavily defended bunkers. The Emperor has 24 hours to surrender or face the consequences.

Conventional craft are unable to navigate the underground bunkers. The Empire's only hope is a top secret, highly manoeuvrable assault craft code-named TerraFire and YOU are the only qualified pilot.

You must blast your ship through heavily defended underground caverns, past wind tunnels, fire-walls and subterranean lakes. You must seek out the stolen nukes, lock on to them with your ship's tractor beam and carry them back to the planet surface and beyond into hyperspace. And then things really start hotting up... 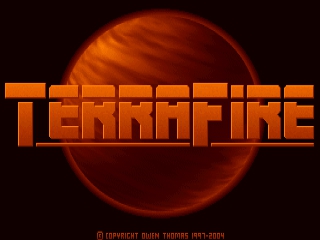