You can play Terroid on this website so you don't need to download and install the game on your computer. We recommend to use Google Chrome when playing DOS games online.

Terroid is a horizontal-scrolling (but still top-down, unlike Stargunner or Interpose) sci-fi shoot-'em-up with very big, pre-rendered sprites and mod tracker music. The game encourages the player to use a more careful approach rather than to blast anything as soon as it enters the screen. The player's guns are rather powerful but slow to reload, and blowing up entire formations of enemy ships instead of one-by-one yields valuable bonuses.

The story is that a lone pilot is out for revenge as a hostile alien force destroys their homeworld after enslaving the entire population and taking it away. Now it's up to the player to fight through alien fleets, reach their planet and free the captives.

Terroid was sold as shareware, with the unregistered version offering only the first level out of nine. The registered game also included two bonus stages, and a "training mode" which is essentially flying through an endless, randomly generated level. DIGITAL Nightmares made the Linux version of Terroid free to download. 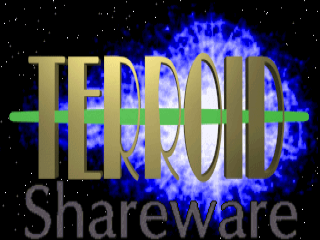