The Castle of Dr. Malvado

You can play The Castle of Dr. Malvado on this website so you don't need to download and install the game on your computer. We recommend to use Google Chrome when playing DOS games online.

The Castle of Dr. Malvado is a simple Super Mario Bros.-like side-scrolling platform game with colourful graphics and very smooth animations. You play as a boy in a red cap who for some reason sets out to defeat the evil Dr. Malvado ("Dr. Evil" in Spanish) and his equally nasty, but rather cute-looking minions. Jump around, jump on the enemies' heads to knock them out, and collect coins for extra lives. Each level ends with a boss battle.

The game was originally included with the DIV Games Studio development suite as a sample, complete with its sources, and later released as a stand-alone download. It appears that Super Roco Bros. is directly based on the code of The Castle of Dr. Malvado, and plays very similarly.

A word of warning though, The Castle of Dr. Malvado is very hard, in part because of the inertia of the player character's movement, making it tricky to dodge enemies and at the same time avoid falls into water, lava and bottomless pits that are just everywhere. It is quite recommended to use a build of DOSBox with save states (like DOSBox-X or SVN Daum), although of course that would be cheating and make the game way less challenging. 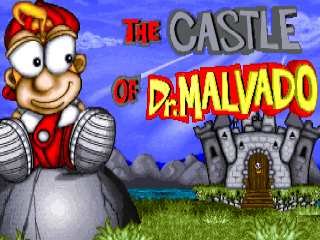