You can play The Elder Scrolls: Daggerfall 0.1 on this website so you don't need to download and install the game on your computer. We recommend to use Google Chrome when playing DOS games online.

To pick items from the ground, press D to crouch, then click the treasure pile/item/corpse with the left mouse button. Press D again to stand up.

This is an early playable demo of The Elder Scrolls: Daggerfall which is quite different from the final product. You can only play a 16th level Breton Spellsword in a single dungeon called The Pit of Jagadha. Also included are demonstrations of the Character Generator, Spell Maker, Item Maker and Potion Maker, but custom characters cannot be played with.

Two versions of the demo were made available, an earlier one with the female character and a later revision with a male one. The dungeon is the same but has minor differences between the versions. The female Spellsword demo is faster but less stable. 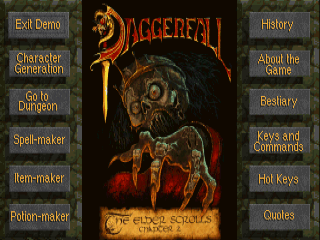