You can play The Great War: 1914-1918 on this website so you don't need to download and install the game on your computer. We recommend to use Google Chrome when playing DOS games online.

To cycle through available options, position the cursor over a unit, then press and hold the space bar and press the arrow keys to select the desirable option (represented by an icon).

The Great War: 1914-1918 (originally released as Historyline 1914-1918) is a turn-based wargame that runs on the same engine as the first Battle Isle game but is set during World War I. Like Battle Isle, the game plays on a split-screen display showing the positions of both players (human or AI), and similar to other wargames, issuing orders to your troops is separated into movement phase and combat (attack) phase: first, players take turns to move units, and then, to attack the opposing side, if possible. Switching between phases is accomplished by pressing F1.

The playable demo, which was originally included on a cover (floppy) disk that came with an issue of the German PC Games magazine, contains one scenario where you play against the AI opponent as the German army against the French. The map is symmetrical and the objective is to either destroy all enemy units or capture the enemy HQ. 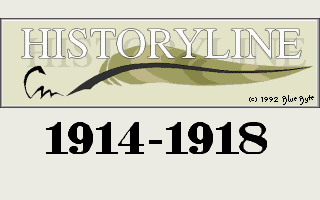