The Kingdom of Syree III: The Depths of Hell

The optional sound/music pack (syree3sb.zip) needs to be installed in the same directory as the main game.

The third game in The Kingdom of Syree series, looking more polished than the previous instalment, but with largely unchanged core playing mechanics. This time you battle against hellish demons that invade the realm.

Similar to The Kingdom of Syree II, this part was marketed as shareware, with some of the quests locked in the free unregistered version. 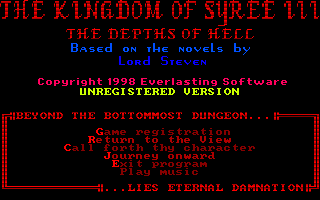