The Lost City of Atlantis

You can play The Lost City of Atlantis on this website so you don't need to download and install the game on your computer. We recommend to use Google Chrome when playing DOS games online.

The Lost City of Atlantis is a side-scrolling platform game that will likely remind you of such titles as Gods, Xargon and Vinyl Goddess from Mars. Here, you control Raghim - a young Phoenician merchant with a thirst for exploration who sets off on an expedition to uncharted waters, only to find himself shipwrecked in a strange land surrounded by monsters.

To survive, Raghim needs to first acquire weapons, which may be purchased at temple shrines in exchange for pearls that he finds. To complete a level, you will need to collect several magic crystals that lie around. Many enemies have ranged attacks that should be either dodged or completely avoided by hitting them first once you have a means to attack. Touching monsters will destroy them but also take away a big chunk of Raghim's health. Swimming underwater will slowly eat away at the health bar too, but health can be replenished with food and health jars wherever they are available (press the down arrow to pick up an item).

The Lost City of Atlantis was marketed as shareware. The complete game has three episodes: Greek, Egyptian and Atlantis. The unregistered shareware version contains the entire Greek episode which spans four levels. 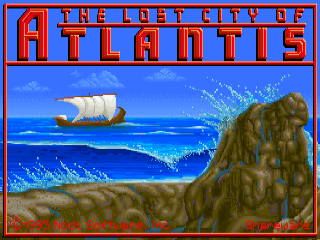