You can play The Perfect General II on this website so you don't need to download and install the game on your computer. We recommend to use Google Chrome when playing DOS games online.

The Perfect General II is a classic style turn-based wargame with hexagonal tiles, and is an updated and enhanced version of the first Perfect General game, with high resolution graphics and improved AI.

The Perfect General II covers modern warfare from World War II to the end of the century. The main focus is on different tactical scenarios and not on historicity, as you will not find period-accurate representations of actual military technology from the second half of the 20. century. Instead, there are generic unit types (light tank, medium tank, armoured car and so forth), each with its own strengths and weaknesses, and effective uses on the battlefield.

As in some other turn-based wargames, gameplay is split into several different phases for unit placement and movement, and the use of indirect (artillery) and direct fire against targets. There is built-in online help accessible at every phase (and indeed in every game menu), which should make it a bit easier for first-time players.

The Perfect General II has two versions of graphical tiles: the Classic set with rather schematic outlines of units and terrain, and the Master set that has more detail. Both sets support two zoom levels.

The demo includes one single-player scenario from over 80 in the full game, with some options disabled. 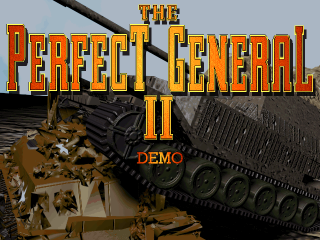