You can play The Stalker on this website so you don't need to download and install the game on your computer. We recommend to use Google Chrome when playing DOS games online.

The Stalker is an action-adventure game loosely based on the science fiction novel Roadside Picnic and its loose film adaptation. A nuclear power plant disaster devastates an unnamed city, leaving behind a contaminated wasteland known as the Zone. The Zone is populated by abhorrent and dangerous mutations, and only brave individual explorers dare to enter the Zone in an attempt to profit from retrieving valuable items. Rumour has it that somewhere in the Zone, lies hidden the Golden Sphere that grants any wish to whoever finds it.

You control an unnamed Stalker out to find the Sphere. The game plays as something in between an early type adventure game (no point-and-click; think The Adventures of Maddog Williams) and a platformer. The Stalker as a gun with limited ammo, but there's never enough to clear any level of enemies because some respawn continuously. You need to avoid many enemies, but dispatching some of them will give points that are needed to complete a level.

There are three episodes in the game, with only the first one available in the shareware version. The episode is split into 12 levels, which may be completed in a non-linear way. In each level, you need to get a certain point score to receive a key that will unlock the exit. Another type of key allows to unlock crates with ammo or medical supplies (so you can't just grab a medikit like in other games). There are radiation zones in every level, some marked and some not, which will fill up the radiation meter and must be avoided.

The game controls are not very smooth, and the enemies are rather hard to hit. Sometimes the Stalker will jump when you not indent him to, or fall unexpectedly, so the controls need some getting used to. 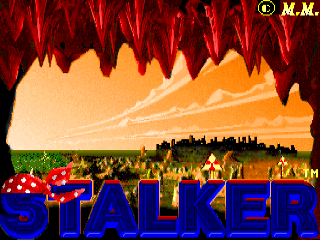