You can play The Walls of Bratock on this website so you don't need to download and install the game on your computer. We recommend to use Google Chrome when playing DOS games online.

Before you start the game (Journey onward), you need to create your character. At any time during play, press F1 for quick in-game help.

To run the game with sound effects and music, legacy Sound Blaster drivers are required (please see the links section below).

The Walls of Bratock is an Ultima style fantasy role-playing game. An adventurer travels to the city-state of Bratock, urged by a prophetic dream that hints at an upcoming war between the native Bratockians and their Shakyr (satyr-like) allies. The game world in presented in an overhead view similar to Ultima or The Kingdom of Syree series.

The player character arrives at Bratock alone, but up to five more characters may join the party. Typical of the period, interaction with NPCs is accomplished by typing keywords, with NAME, JOB and BYE being the basics of pep-talk for any character. Combat is turn-based and occurs on a tactical combat screen where the player sequentially gives orders to party members.

The Walls of Bratock was originally distributed as shareware, with the registered users receiving the latest updates, manual, game world map, and cheat codes. The unregistered version contains a shareware nag screen with a 30-second delay before playing. As of 2021, the registered version can be purchased as a part of the OSP Complete Archive (please see the links section below). 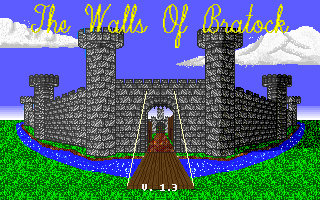