You can play Thor's Hammer on this website so you don't need to download and install the game on your computer. We recommend to use Google Chrome when playing DOS games online.

This is a liberated game: it was originally sold as shareware but on 16 July 2009 the author made the full registered version available as freeware.

Thor's Hammer is a first-person adventure game with slight role-playing elements in a medieval fantasy setting. The player takes on the role of an unnamed hero who is tasked by the wizard Tyr to find the powerful Thor's Hammer and use it to rid the land of great evil. The hero's journey unfolds in a 2.5D environment not much more advanced than that of Wolfenstein 3D, but much more colourful and varied, taking the player to remote villages, mines, dungeons, underground caves and castles.

The game is split into three episodes. In the first, the player is tasked with saving a small village beset by various troubles ranging from orc raids to a necromancer threat. This is the only episode with non-linear plot progression and a central hub area from which the dungeons are accessed. In the second episode, the hero journeys to find the Hammer, and in the third, goes on to defeat the demon after the Hammer is found. 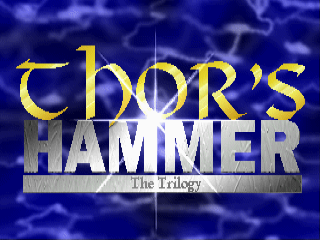