You can play Thunder Zone on this website so you don't need to download and install the game on your computer. We recommend to use Google Chrome when playing DOS games online.

Thunder Zone is a one-on-one space shooting duel game similar to SplayMaster, with both titles descending from one of the earliest computer games in existence, Spacewar! from 1962. However, Thunder Zone allows to play either over network or against AI opponents with adjustable difficulty levels.

Both players' ships are armed with limited-range lasers as the default weapon, but two more extras can be picked for each match, which range from homing missiles and proton torpedoes to cloaking devices and other bonuses. The paying field is a relatively small area with warping edges, and the positions of both ships can be tracked on a radar map in the bottom right corner. The ships are affected by inertia and are a bit hard to steer, comparable to Garnott 2 and other space flying games.

Thunder Zone was released as freeware by its author. It is recommended to use Gravis Ultrasound (GUS) for sound and music output, which is a supported feature in DOSBox. 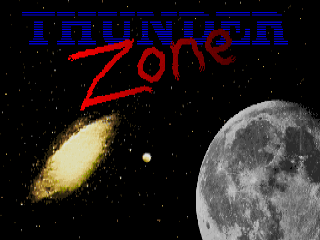