You can play Tornado Squadron on this website so you don't need to download and install the game on your computer. We recommend to use Google Chrome when playing DOS games online.

Tornado Squadron is a freeware combat flight simulator made with Domark Software's Flight Sim Toolkit. Here, you are Britain's Royal Air Force pilot of a Tornado IDS fighter-bomber during a fictional armed conflict with an unspecified enemy.

The game has ten missions with various objectives, including base defence, air strike support, and tactical strikes in enemy territory. Scenarios can be played in any order.

The game does not come with any kind of manual, but the controls are the same as in other FST games, so you could look up the instructions for other sims, such as Jaguar GR1: Strike Force Delta Zulu by the same author. 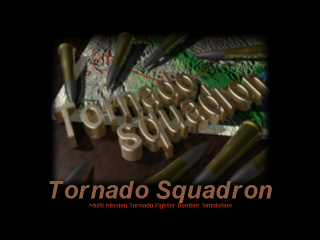