You can play Total Knockout Boxing on this website so you don't need to download and install the game on your computer. We recommend to use Google Chrome when playing DOS games online.

Total Knockout Boxing is a behind-view boxing game similar to Super Punch Out!! and Toughman Contest, but here, all participants are female. The game uses high-resolution pre-rendered sprites, but of a somewhat cartoonish quality.

The player's fighter can be controlled with the keyboard, joystick of mouse, and moves around the ring as a transparent outline, allowing unobstructed view of the opponent's actions. In addition to the standard punches and blocks, each fighter has special moves that are executed by following performing a series or regular moves in a sequence, much like in versus fighting games. A round ends when one of the contestants' stamina bar is fully depleted, or if the time runs out.

The playable pre-release demo showcases a single fight between two of the game's ten boxers, a bonus gym round and multiplayer support. 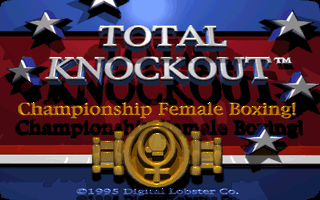