You can play Tower of Fortune on this website so you don't need to download and install the game on your computer. We recommend to use Google Chrome when playing DOS games online.

Tower of Fortune is a first-person fantasy role-playing game that is very similar to The Bard's Tale series (and its unofficial spin-offs like The Bard's Lore) or Ancients 1: Death Watch.

You control a party of adventurers that has arrived at a remote village in order to explore an abandoned wizard's tower nearby. Similarly to The Bard's Tale, movement is tied to a fixed grid, with the game world rendered in a quasi-3D perspective. Both movement and combat are turn-based, and during encounters characters and enemies move one by one, as the player gives orders to each character at every turn.

Tower of Fortune was created in QuickBASIC by one person, but looks like it could be a quality commercial product from the early 90s. A charming soundtrack composed of tunes by Bjorn Lynne (of Worms fame) completes the immersion. Unfortunately, development was halted before the game was complete, so the latest available version only contains one quest, but it is fully playable. 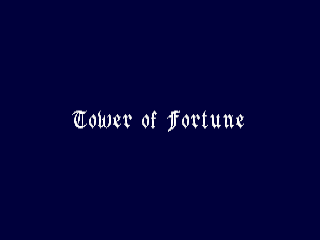