You can play Traffic Department 2192 on this website so you don't need to download and install the game on your computer. We recommend to use Google Chrome when playing DOS games online.

This is a liberated game: it was originally sold as shareware, but on 19 July 2007 developer John Pallett-Plowright made the registered version available as freeware under the Creative Commons Attribution-NoDerivs 3.0 License.

Traffic Department is a unique combination of fast, arcade action and an adventure with a story that unfolds as you play.

The setting is in a dark city of the future, quite remniscent of Mad Max. As Lieutenant Velasquez, you must defend a city from oncoming attackers in hoverskids, helicopters, and other futuristic vehicles.

Each episode of TD features many missions. At the beginning of each one, you'll encounter a cinematic briefing; then, the action begins. After you're done, the plot continues to evolve until you reach the conclusion.

Enter the following codes to cheat (press and hold all of the keys at the same time):

P-O-J-A: Gives you a javelin at any stage
T-I-M: Full missiles 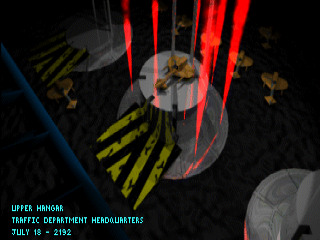