You can play TwinBlok on this website so you don't need to download and install the game on your computer. We recommend to use Google Chrome when playing DOS games online.

TwinBlok is an Arkanoid/Breakout type game for one or two players that tries to be original by turning the screen by 90 degrees so that the paddle is moving vertically, similar to the old game of Pong (and indeed the two-player match is very similar to Pong, but with breakable blocks in the middle). It is also notably harder than an average Breakout clone, bot only due to the unusual screen orientation, but also because at the start, the player is given the smallest paddle possible, making it quite a challenge to keep the ball in the field.

Some bricks contain bonuses that are released when they are broken. Thankfully, you do not need to catch these bonuses (which would be a task in itself with the small paddle), instead they are activated as soon as the ball touches them. But this also means that the player can do little to avoid negative "power-downs", like a pickup that shrinks the paddle in size, or another that makes balls temporarily powerless (unable to break bricks).

TwinBlok was apparently developed in-house by Webfoot Technologies, as the company was founded by some members of The Toxic Zombies demo group. It was sold as shareware, with the unregistered version including only five single-player and four two-player levels out of a total of 75 levels in the full game. 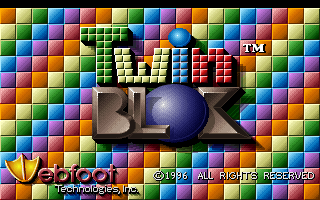