In this game you control Twork, the young mage and the last of his kind, who must oppose the evil red mage and his minions.

Gameplay is fairly standard: you run, jump, collect bonus items, avoid hazards and and shoot various monsters that stand in your way. Twork makes heavy use of pre-rendered graphics that are not of the best artistic quality, but compensates for this with sleek, fast gameplay.

The game was originally sold as shareware, with only four levels from the first world available in the unregistered version. The full release supposedly contained four worlds with six levels each. Earlier shareware versions promised ten worlds but apparently this was cut down later on. 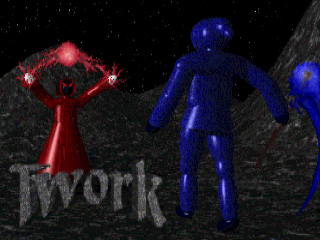