You can play Tyrian 2000 on this website so you don't need to download and install the game on your computer. We recommend to use Google Chrome when playing DOS games online.

This game was officially released as freeware in 2004.

NOTE: This game can be played directly in Windows using a source port (see the links section below).

Tyrian 2000 is an updated re-release of Tyrian 2.0 which adds the fifth episode, new game modes, a ship editor and other extra features.

The demo version contains the entire first episode of the game, similar to the original Tyrian shareware releases.

Use these passwords to get different ships:

You can also enter DESTRUCT to access a secret bonus game. 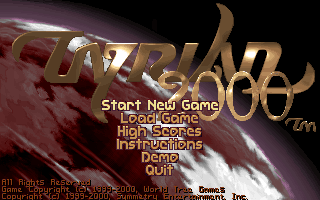