NOTE: The demo uses a Windows installer, however it can be opened as an archive using WinRar or similar software if it doesn't work.

Ultra Violent Worlds is a straight out shooter. There's no phonebook sized manual and no complex control method; there's just you and a whole lotta Zarnaxian slime to shoot down.

In 2305, Earth had reached a new level of prosperity, but in the early hours of the 21st of February, Earth's future was gripped firmly by the throat.

The Zarnaxians entered Earth territory with a sudden burst of ultra violence. Within an hour the colony on Mars was overwhelmed with Zarnaxian forces. Earth's orbiting space station - AlphaStation - was scorched by laser fire and blasted into space dust as the Zarnaxians prepared a crushing blow to deliver on their final assault.

Swarms of Zarnaxian ships streamed over Earth's major cities targeting anything that displayed signs of life but a large portion of the planet was left untouched. That was until the moon was hurled towards Earth by the graviton rays of the Zarnaxians' largest ships.

The air is now black with dust from the impact and strangely still. Earth's defence forces no longer exist and there is little hope for the scattered human survivors that are continuously hunted by the Zarnaxians. Your mission:

Return to Earth space and liberate Earth and the Mars colony. 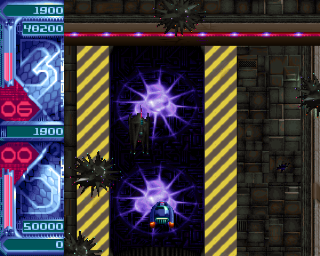