You can play UnReal World 2.04 on this website so you don't need to download and install the game on your computer. We recommend to use Google Chrome when playing DOS games online.

This is an early, freeware version of the well-known Finnish rogue-like RPG, UnReal World. It uses text-mode graphics with modified characters, but also rather heavily leans into fantasy territory, which was entirely discarded in favour of historical realism by the developers.

The game includes one short campaign called Wyvern, with the main objective being to slay a wyvern in a cave. There is one village where the player may pick up supplies, and two smaller caves for grinding.

The player character may be human or one of several fantasy races, such as elf, troll or half-orc. The few available classes include fisher, hunter, legionnaire or locksmith, which highlights the focus on survival mechanics that eventually became a prominent theme in the game. 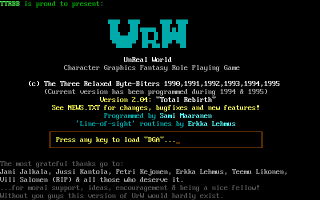