You can play VERITECH: Variable Flight Simulator on this website so you don't need to download and install the game on your computer. We recommend to use Google Chrome when playing DOS games online.

This is a fan-made sci-fi simulation game set in the universe of the Japanese anime series Macross. The simulation part was made with Domark Software's Flight Sim Toolkit. As a pilot in the U.N. Spacy military, the player controls a Valkyrie fighter/mecha craft on a series of missions. The Valkyrie can transform from a ground-based humongous mecha walker into a fighter jet that resembles a real-life F-14 Tomcat.

Veritech includes a total of four scenarios, of which the first one is a training mission. The developers apparently intended to have more levels, possibly selling them as shareware, but these plans never materialised. 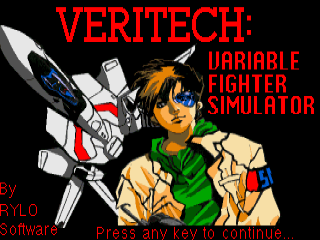