You can play Vietnam on this website so you don't need to download and install the game on your computer. We recommend to use Google Chrome when playing DOS games online.

Vietnam is another shareware flight sim made by Ray Purvis with Domark Software's Flight Sim Toolkit, this time set during the Vietnam War. Pilot either the F-4 Phantom fighter-bomber or the A-6 Intruder craft in various missions including defence, attack and support.

The unregistered shareware version includes just three missions (and what appears to be a test mission with no briefing), while the registered game promised a lot more scenarios. The game runs in SVGA/VESA mode by default, but a separate VGA version was provided separately for slower computers, including a VGA shareware version with just two scenarios. 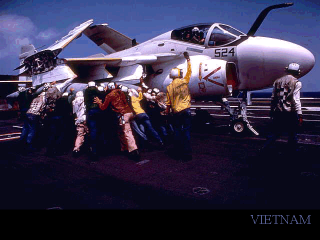