You can play Visual Star Trek on this website so you don't need to download and install the game on your computer. We recommend to use Google Chrome when playing DOS games online.

Visual Star Trek is considered to be one of the best fan-made Star Trek games available. The story is that the Federation is at war with Klingons and their allies, and it's up to Captain Kirk and the Enterprise to single-handedly resolve the conflict.

The galaxy map in the left side of the screen is divided into quadrants, with the current one represented in more detail in the window at the top-right. Moving the Enterprise around the navigation grid is accomplished with the right mouse button, and the left button fires weapons (if armed). You'll need to fend off Klingon, Romulan and Tholian ships off beleaguered Federation bases, and ultimately destroy them all before the allotted time runs out. The Enterprise can dock at bases to reload and refuel, and send parties to planet surfaces to collect resources. Everything is turn-based so plan your actions carefully.

Visual Star Trek is a freeware game that was apparently released in an incomplete state - the info screen and some other features don't work. However, it's fully playable. What's more, the author of the game remains unknown to this day. 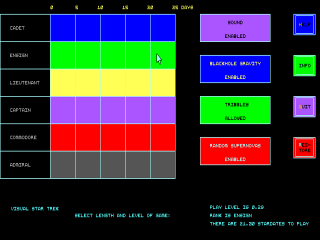