You can download the full version of Warcraft II: Tides of Darkness from the download stores listed below.

NOTE: This game uses a DOS installer. For details on how to install a game in DOSBox, please check this tutorial.

The award-winning sequel to Warcraft: Orcs & Humans continues the story of the epic conflict between orcish hordes and human kingdoms. The core gameplay has been vastly expanded upon, with better controls, less stringent mechanics, larger maps, more units and buildings, more magical spells and more environments.

Each side now has full-fledged naval forces, versatile air units and fearsome spell-casting allies. The story is narrated through fully voiced-over briefings and CGI cinematic sequences. Play as the noble humans vying to reclaim their conquered lands, or the savage orcs bent on bringing the world of Azeroth to its knees.

The shareware version of Warcraft II includes a total of six unique missions that are not found in the retail game, spread across two short campaigns (one for each faction). There is also one multiplayer map for two players.

To use the following cheats while in game mode, press the Enter key. At the bottom of the screen you will see a MESSAGE: prompt. Type one of the cheats shown below and press return to activate it. If you have typed correctly, you will be notified by the text "Cheat enabled" or "Cheat disabled". 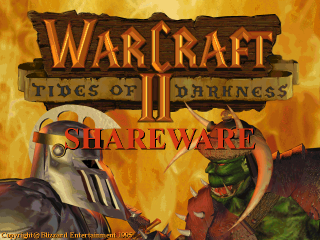