The demo version offers a tutorial and two scenarios. However, playing time is limited to forty turns, and saving and loading games is disabled.

Warlords II is the world's favourite fantasy strategy game. Starting with a single castle, you must build your armies, marshall your forces and conquer the entire world, before your mean and avaricious neighbours do the same. With random worlds, hidden maps, quests, diplomacy and super smart computer opponents, Warlords II offers an entire world of conquest.

Warlords II breaks new ground in strategy gaming. Based on the award winning Warlords game, Warlords II is the definitive game of conquest and empire, triumph and glory!

Choose a short campaign or total war. Send your heroes on magical quests. Explore hidden maps on random worlds. Contend against the meanest, most disagree computer opponents ever created.

Warlords II was created due to overwhelming demand from players of the original Warlords game. The Warlords II Scenario Builder was likewise released because warlords fans demanded the ability to create their own scenarios. Warlords II Deluxe is the product of user's desires for a networkable version of Warlords II.

To create Warlords II Deluxe, with all its enhancements and network features, the entire program had to be rewritten. SSG also took the opportunity to make a number of improvements to the Warlords II Scenario Builder, and to redo all scenarios in 256 colour SVGA graphics. 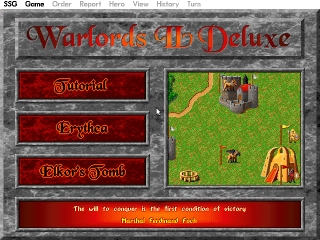