You can play WarWizard 2 on this website so you don't need to download and install the game on your computer. We recommend to use Google Chrome when playing DOS games online.

This is a work-in-progess demo of the unreleased sequel to WarWizard, a fantasy RPG by Brad McQuaid. The demo features high-resolution animated graphics in an isometric style reminiscent of later Ultima games, and includes a content editor. A rather large portion of the game world is available for exploration, with a big city, shops, NPCs and various creatures to encounter.

There is no sound in the demo, and some commands are not represented on the graphical interface. Thus to ask an NPC to join your team, you need select that character and press J. To quit, press Q.

WarWizard 2 was never completed, but the demo was impressive enough to land Brad McQuaid and Steve Clover on the EverQuest project team as lead designers. 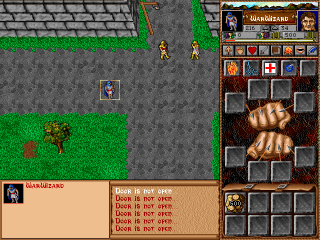