50 years from now...Things are just a little bit different. TEK is the drug of choice in New L.A. It's your mission to stop the tidal-wave of addiction.

The creator of the Tekwar Universe, William Shatner, interacts with players while starring as Walter Bascom, the head of the elite Cosmos detective agency. In new, game-only, full-motion video, Shatner will help guide you through the city and the labyrinth of The Matrix to gather clues, solve puzzles, and defeat deadly enemies.

Along the way you'll have to make a few decisions. Are dead civilians a necessary cost of the war against Tek? Should you merely stun the Tekgoons or should you set them on fire with your flame thrower? What do you do about the Teklords, themselves.? Mr. Bascom wants them alive; perhaps you have other plans? It is entirely up to you...

Tekwar features amazing graphics; unlike those in any other 3D action game. Combined with the stunning graphics is a cunning AI along with a host of enemies and weapons with which to slay them. Capstone is taking 3D action gaming to a new level. That means all the action you could ever want along with alot more "gaming" than you're probably used to. 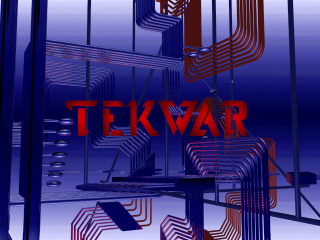