You can play Wings of Thunder on this website so you don't need to download and install the game on your computer. We recommend to use Google Chrome when playing DOS games online.

It is recommended to play this game in SVGA mode, please select it by pressing the appropriate number key on the difficulty selection screen.

On the runway, press 0 for maximum throttle, once the speed (numbers in the top left corner of the HUD) reaches about 135 mph, press the down arrow to start taking off. Once airborne, press G to retract landing gear. Enter cycles through weapons, Space bar fires current weapon. You can view more controls at game startup.

Wings of Thunder is a combat flight simulator with a sci-fi theme, created with Domark Software's Flight Sim Toolkit. The year is 2028, and mankind is at peace, will all military standing down and disarmed. However, a scientific experiment from five years prior results in the creation of hostile artificial life forms called "Mandroids" that have created their own warlike nation and now threaten the rest of the world. Luckily, an old A-10 Warthog is still operational, and there are stockpiles of bombs, so this flying machine, nicknamed 'Wings of Thunder', is now humanity's only hope against their militaristic adversary.

The action takes place on a single world map filled with various enemy installations and mobile forces. There is a total of 22 targets, which are described in a separate text file, each counting as a mission objective. The plane is outfitted with homing detectors that will point towards each target in succession (per the background story, human spies have planted homing beacons at critical Mandroid sites). While in the game, the player can press the slash key (/) to cycle between frequencies, but generally targets may be destroyed in any order. Landing on a neutral runway will repair any damage sustained by the plane, and refill ammo supply.

Wings of Thunder was released and distributed as freeware, but the author, Mike Layer, accepted voluntary donations from users. 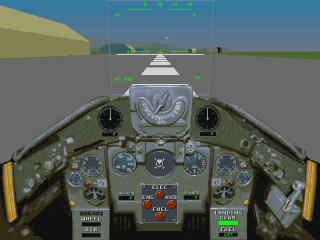