X-COM: Terror From The Deep

You can download the full version of X-COM: Terror From The Deep from the download stores listed below.

The playable demo includes one sample combat mission, as well as screenshots from the full game.

X-Com Agents are once again called upon to defend the Earth from alien invasion.

Awakened by the cosmic emissions of their brothers, the vast chambers of innumerable species begin their re-animation cycle. X-Com must face a new terror, an army of aliens that are already here, but in an environment more deadly than deep space. The aliens of the depths are well prepared to take on man in all the oceans, even bringing the war onto the land. Enter into combat in a strange and alien world, use new technology to enable the war to be taken to the enemies. Arm your troops for an encounter the likes of which man has only dreamed of in his worst nightmares....

A vast sleeping enemy has awoken. When the colonization vessel T'leth crash landed on Earth some sixty five million years ago the emergency systems placed the aliens in suspended animation. A distress call was sent but never received by the alien's homeworld. Over the eons the computers have awoken small groups of aliens to attempt a colonisation, but the strategies and devices have been imperfect. They have also been sinking ships over the centuries, to plunder their cargoes and recover gold - the base metal in the hyper-alloy Zrbite.

X-COM: Terror From The Deep utilizes the familiar UFO control system, multiple menus and tactical icon bar. Terror however expands and refines all aspects of the system - the new UFOpedia is more structured and incorporates a clear and more concise database. The tactical section utilises multiple colour palettes and animations to conjure the atmosphere of the deeps but still retains the familiar turn-based combat system. The new audio system utilized in X-COM: Terror From The Deep creates a true other world ambience and alien atmosphere. Featuring twice as many tactical sites and 10 times the level of animation, Terror From the Deep expands the UFO engine into a believable aquatic reality.

The alien strategy comes in two distinct parts. The first is to set up various bases in strategic locations around the globe that manage to control the majority of the seas. The second, and most dangerous, part of their plan is to recover the necessary artefacts that will allow the alien races to energise the core of T'leth and awaken the Great Dreamer, the ultimate alien whose darkness will engulf the globe.

As the leader of X-Com, you will have to counter these aliens with new technology: weapons for aquatic warfare, submarines, and floating bases around the world. As you encounter alien vessels as they race through the seas, recover advanced alien technology and battle strange sea dwelling creatures.

The span of the alien strategy is based around a series of deep sea bases from which they launch attacks and recover artefacts. These range from small complexes, through large complexes, ancient cities, strange unnatural formations, to the immense colonisation ship, T'leth, the ultimate goal. X-Com will be faced with reprisals and its bases will be attacked by the aquatic aliens during the course of the game.

X-COM: Terror From The Deep also features several new effects some of which include: water effects (giving colouration of objects), multi-level tactical maps featuring exciting depth effects, new alien life forms with new technologies and weaponry, new missions - surface missions, on board ships, in ports and on islands, classical cities, coral constructions, sunken ship wrecks, upwardly spiralling bubble effects from breathing apparatus, gas powered weapons leaving wakes as they tear through the water, alien bases have entrances (rather than jumping directly into the base. Find the entrance to enter the alien lair.) and a new alien encyclopaedia full of new watery denizens and mutation technology. 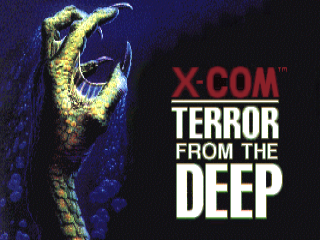