X-Men: Children of the Atom

Born of the Atom. Raised in the Arcade. Coming home... for the final battle!

It's all here. Ultimate combat. Mutant Carnage! X-Moves! Mid-air action! Huge characters! Sizzling graphics! Exactly like you played it in the arcades!

Can you handle the Danger Room? Have you got enough to defeat Magneto, Omega Red and Sentinel? Are you savage enough for Wolverine, powerful enough for Cyclops...are you good enough to join the new breed of heroes?

Prepare yourself, Mutant fans! The inevitable outcome of years of blood thirsty antagonism between the X-Men and the Acolytes has arrived! Deep down you always knew it would come to this but it's even more savage than you thought it could be!

It's the ultimate struggle between good and evil! Full scale Mutant Civil War!

The X-Men, the ultimate team of mutant super heroes, face off against their evil adversaries, the Acolytes, Magneto, Omega Red, and Spiral...and it's unrelenting combat all the way!

The X-Men are desperately trying to defend normal humanity, the very people that fear and despise them, from their own evil ren egade kind, The Acolytes, who are bent on world domination and the enslavement of Humanity!

Then, of course, there's those militant, mutant-killing, misguided, self-appointed, robotic guardians of the non-mutant populace, The Sentinels! They're out to destroy all mutants, good or bad! X-Man or Acolyte, it makes no difference to their cold-blooded, computer brains! If it's a mutant, they want it dead! They're the Sentinels and that's what they do, kill mutants dead!

You'll need Wolverine-speed, Colossus-strength, Iceman-cool and a fistful of X-Moves to keep your head above the swirling mayhem of this mutant apocalypse!

No mercy! No holding back! No second tries! The fate of the world is at stake here! This is it! Mutant Armageddon! 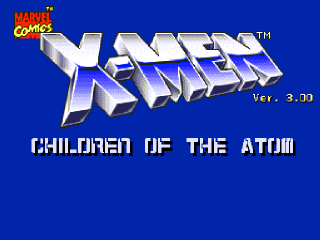