You can play Xatax on this website so you don't need to download and install the game on your computer. We recommend to use Google Chrome when playing DOS games online.

In the 25th century humanity was attacked by a mysterious alien force known as the Xatax. The aliens began to attack the planets of the galactic Alliance, consuming the life force of their inhabitants and growing stronger after each victory. Accustomed to several centuries of peace and virtually disarmed, the humans have no other weapon at their disposal but an ancient starfighter, which has been taken from the Interguild Museum and restored to combat condition. This vessel is humanity's last and only hope.

Xatax is a side-scrolling shooter in which the player must defend the remains of the Alliance's guilds against the titular aliens. This is accomplished in a traditional shoot-em-up fashion, fighting waves of alien ships and stationary turrets. The player-controlled ship can become stronger by collecting power capsules dropped by defeated enemies.

The game features three different worlds, of which the shareware version only contains the first. 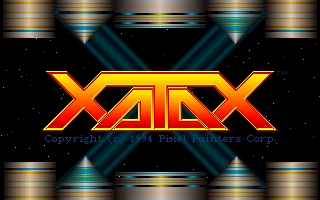