Argo Games released this game as freeware in April 2006.

Xenophage is a fighting game in the same genre as Mortal Kombat. This game features scrolling arenas that also zoom in and out, depending on how far apart the fighters are from each other. This is a unique feature in fighting games. The fighters all come from unique alien planets, so they look very cool and unusual. It's up to you to figure out their special abilities and moves.

The following cheat codes can be typed at any time during a fight and last for the current fight only.

BISHOP - The announcer says in a very deep voice, "YOU SUCK!".
BLOOD - Use this one to increase the blood that flies off each of the fighters.
GLASSJAW - The booklet that comes with the registered version says that activating this code will stun your opponent after each punch or kick, but it will also stun YOUR fighter if punched/kicked as well! If you hit your opponent again while stunned, this second hit will make the fighter active again instead of doing the stun effect.
HELIUM - This makes the fighters jump higher and come down to the ground a little slower.
INVISIBLE - Both fighters become completely invisible!
ORCHID (registered version only) - This one only works with Selena on the screen. She stiffens and sorta blossoms and grows! ;) Try it with 2 Selenas on the screen at the same time for a really nice effect!!
SHADOWS - The bodies of both fighters disappear from the screen and all you can see is their shadows.
STAIN - The blood that flies off the fighters stains the ground.
THOUGHTJINX - Both fighters fall down and die! The fighters will continue falling down and dying (with a match TIE) until you type in the code again.

The following cheat codes must be typed in the Menu Screen and only work in the registered version.

CHAMPS - You can select any one of the three Boss fighters (Parasite, Champion, or the Grand Champion) in the Choose Player screens! You can now practice fighting the Bosses in Free Play mode. Or if you like, practice being a Boss in Training and Free Play modes, and then whip their counterparts in Story Mode! Also works when typed from the Player Select screen.
XACMAN - Type this code in when the Main Menu (or other menu) is on the screen to enable a new menu option on the Main Menu screen that says, "Play XacMan!", a hidden mini-game.

All cheat codes can be deactivated by retyping them.

Unlock Blarney
The booklet that comes with the registered version states that the BLARNEY cheat code is activated by typing it in during any menu screen, but it doesn't work. To activate Blarney, you need to edit the XPR.INI file with a text editor. BE SURE TO BACK UP THE XPR.INI FILE BEFORE YOU DO THIS! Below the [Xenophage] heading up at the top, change the value for Player2 to equal Blarney ("Player2=Blarney"). Run the game and select Free Play mode, and you'll see that Blarney now is the name for Fighter 2. Look in the Choose Player 2 Menu option, and you'll see a cute picture of Blarney in the cast of characters! Go into a Free Play game and fight a round or two with Blarney. You can also change Player1 to Blarney and play as the deadly dinosaur, but the game gets a little buggy!

You can change the XPS.INI file in the shareware version too, but all you'll get is a picture of Blarney in the Player Selection screen. If you try to enter a Free Play fight with Blarney, you'll be thrown to DOS with an error message. 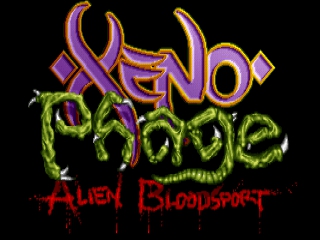