Xerix is a side-scrolling shoot 'em up. The player must guide a space ship through two different levels and destroy or avoid the many enemy and obstacles found within an alien structure that endangers the Earth.

The project has been codenamed XERIX: the eXtended Enemy Response and Infiltration eXperiment. The player's eventual objective is to destroy the alien structure itself. 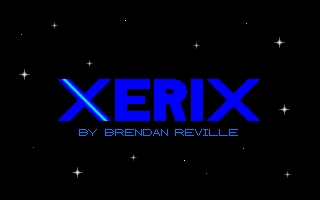