You need Ducks to play this add-on. Unpack the new episode into the Eggs folder of your Ducks installation, then use the PickEggs.exe programme to load the episode.

Ah, the season of goodwill to all men. Nice. But what about goodwill to ducks? Normally, we're all too busy with our turkey and our wrapping paper and our terrestrial premieres of films from 12 years ago to give them any consideration at all. So be good to yourself, and to them. Make this year different.

Xmas Ducks 2000 takes the original Ducks concept and sticks a carrot and two lumps of coal into its face. The ducks themselves now wear Santa hats, of course... as do the electric duck zappers, for some reason. Even the invading green aliens seem to be in party mood, wearing their new paper hats with pride (or as close to pride as you can get when you insist on swallowing an entire family one by one and then burping). Sadly, this time, the ducks have been sent no rockets in which to escape. Their only option is to stow away in Chrismas presents and wait until they're opened on the 25th. And keep their feathers crossed that they'll be safer there than where they are at the moment. If you want to point and laugh at their plight, it's a good job there are a selection of screenshots on show.

The 8 levels in Xmas Ducks 2000 use new backgrounds (including some rather funky snow) and sounds, and reuse the original tiles from the main 80 level Ducks game. The original levels can be played using the new animations and object types - the Xmas Ducks 2000 levels feature in two new episodes, called MULLED WINE (playable by everyone) and FIGGY PUDDING (only accessible to registered users). And it costs nothing to download, so give it a go... I'm sure the ducks will appreciate it. 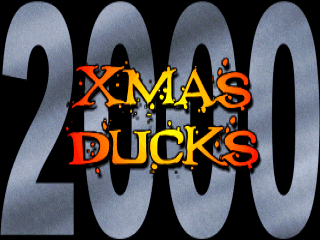