You can play Zone 66 on this website so you don't need to download and install the game on your computer. We recommend to use Google Chrome when playing DOS games online.

The file zone66g.zip adds the Gravis Ultrasound soundtrack to the game.

Zone 66 is an ultra high-tech 32-bit arcade game for 386 and faster computers. You pilot your fighter jet through a huge 360-degree scrolling playfield that's jam-packed with 256-color enemies and terrain. Inflict massive damage on the enemy bunkers, artillery, and industrial sites, leaving craters and devastated earth in your wake. Featuring a state-of-the-art digital sound track for the Sound Blaster and Gravis Ultrasound cards.

Bypass the opening screen: Start the game with the commandline parameter GAME.EXE TranIsEvil, or ZONE66 -? -? -? TranIsEvil. 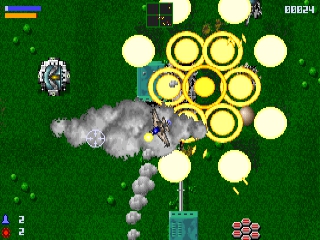