You can play Zorro on this website so you don't need to download and install the game on your computer. We recommend to use Google Chrome when playing DOS games online.

Zorro is a cinematic platform game obviously inspired by Prince of Persia and trying to recreate most of its features and mechanics. As the title suggests, you control the eponymous character on a quest that takes him through various locations with highly improbable layouts.

Dangerous platforming, traps and sword fights are all borrowed from Prince of Persia, yet while the animations are rather smooth the way the game controls isn't. Zorro feels clumsy at best when it comes to navigating his surroundings (thankfully there seems to be no time limit, and you can save your progress anywhere in a level), and overpowered in combat as he can use not only a sword but also his trademark whip, leaving the enemies no chance to deal a blow.

The level design appears haphazard and hardly planned out, with the game forcing the player to explore the surroundings at the cost of losing health from steep drops, enemies are placed in dead ends with no useful items to be found, and the elegant complexity of Prince of Persia's levels is nowhere to be found.

In spite of over-the-top approach to hazards and traps, playing Zorro will likely bring a smile to your face at just how hilariously clumsy the character can get (which invariably throws you back to the start of a level after yet another iteration of the brave character's demise). Later on the game gets even less sanity with giant man-eating Venus Flytraps making an appearance in the Californian jungle.

You should certainly try out this game as there aren't many Prince of Persia clones but don't expect much. There's some casual fun to be had, and the game doesn't really get frustrating in spite of its design flaws. Perhaps this is its only true advantage. 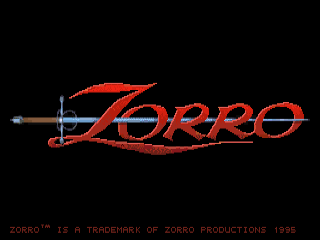