You can play 2FAST4YOU on this website so you don't need to download and install the game on your computer. We recommend to use Google Chrome when playing DOS games online.

Use the arrow keys to steer the car as in any other racing game. When you have a powerup, press Space to activate it.

2FAST4YOU (also known as BiFi Racing) is a cartoonish racing game similar to Wacky Wheels. The car controls are very simple, and in the competitive mode, there are various arcade elements such as powerups that give advantage to the player (they look like black half-spheres lying on the road), as well as obstacles like oil patches that will send the player's car spinning uncontrollably if you drive over them.

2FAST4YOU was created to promote Bi-Fi meat snacks in Germany. In 1995, players could even take part in a nationwide contest (an option still available in the game): completing rally-style timed rounds would result in a password that players needed to submit as proof of their results. 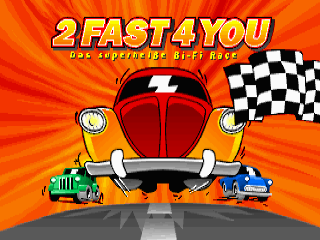