You can play Anacreon: Reconstruction 4021 on this website so you don't need to download and install the game on your computer. We recommend to use Google Chrome when playing DOS games online.

Anacreon: Reconstruction 4021 is an early turn-based 4X strategy game of interstellar conquest, in many ways similar to Master of Orion. The player acts as a ruler on a planetary scale, commanding armies and space fleets, with the goal of expanding and eventually conquering the entire galaxy, triumphing over other contenders. Capture planets, build fleets, mine resources, explore and wage war against other would-be emperors in this simply-looking, but quite in-depth strategy title.

The game is entirely text-based, and played through a multitude of menu screens that allow to control various aspects of the player's galactic domain. It is highly recommended to study the game manual to familiarise with the controls before playing. There are several scenarios with varying difficulty, time span and objectives, some for more than one human player.

Originally a commercial game, Anacreon was released as freeware by its author George Moromisato along with the source code. A free, updated Windows version with a more user-friendly interface is also available, and an even newer browser-based version can be played too (please see the links section below). 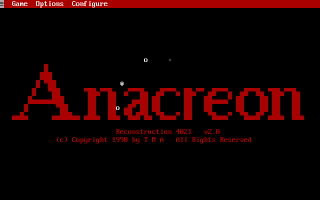