Armored Moon: The Next Eden

You can play Armored Moon: The Next Eden on this website so you don't need to download and install the game on your computer. We recommend to use Google Chrome when playing DOS games online.

Armored Moon is a real-time strategy (RTS) that combines many elements from its popular predecessors, first and foremost Westwood Studios' classics Dune II: The Building of a Dynasty and Command & Conquer. The core gameplay mechanics are largely similar: you build up a base, pump out units and set off to destroy all hostile presence, fending off waves of enemy attacks from time to time.

Presented in isometric perspective, which was becoming trendy in the year of its release, Armored Moon takes place, well, on the moon, which is apparently colonised by humans but an armed conflict breaks out. The palette uses bleak colours, giving the landscapes an appropriately eerie sci-fi look.

The game simplifies resource gathering by introducing towns that continuously generate income. Towns may be captured by engineer-like units (cyborgs), and each is surrounded by a limited area of concrete where other structures may be build. Out of these, the most important is the teleporter that brings in new units for your army that appear almost instantly but cannot be ordered in unlimited quantities.

Furthermore, units gain experience and level up as they participate in combat, so keeping them alive is very much in the player's interest. Special supplier units will take care of repairing damage. Otherwise, combat is fairly typical of Command & Conquer clones and inevitably boils down to the simple rule that the more numerous your force, the better chances to win.

The playable demo of Armored Moon includes one mission, with ten missions in the full game. 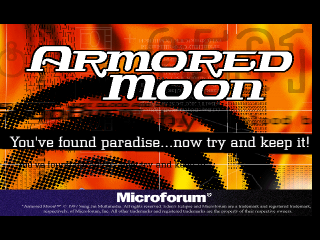