Arrakis is a real-time strategy game inspired by Westwood Studios' classic titles Dune II: The Building of a Dynasty and Command & Conquer. Take control of the forces of one of three Great Houses and conquer Arrakis, a backwater desert planet that is the only source of valuable spice in the known universe.

The game has three campaigns, one for each House, plus the Skirmish mode where you can play at the highest tech level on any of the campaign maps or on customisable randomly generated maps. Arrakis also comes with a map editor so you can make your own scenarios.

Stefan Hendriks also made public the source code of Arrakis, in QuickBasic 4.5. 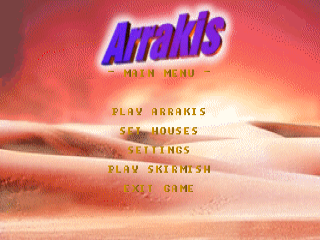