You can play Bio Menace on this website so you don't need to download and install the game on your computer. We recommend to use Google Chrome when playing DOS games online.

This is a liberated game: it was originally shareware, but in December 2005 Apogee Software released the full version as freeware.

You are Snake Logan, a top CIA operative who likes to do things his own way. Metro City has fallen under the attack of hideous mutants and your mission is to fly recon over the city and report back. While circling over the city you're shot down by hostile forces and forced to crash land on the streets of Metro. Grabbing what supplies you can find you are out to discover the source of these mutants and especially the guy who shot you down!

Intelligence reports indicate that a man calling himself Dr. Mangle is responsible for the mutants and the destruction of Metro. You will have to battle your way through many levels packed with evil mutants and robotic guards to finally infiltrate Mangle's fortress and defeat him. You think to yourself that this will be the most dangerous mission of your life.

Try out some of the secret weapon attacks hidden in the game: 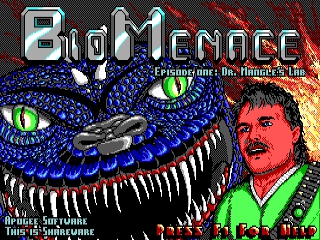