You can play Conquest of Elysium II on this website so you don't need to download and install the game on your computer. We recommend to use Google Chrome when playing DOS games online.

This is a liberated game: it was originally marketed as shareware but now you can download the full version for Windows, MacOS and Linux from the official site (please see the links section below).

Conquest of Eysium II is a fantasy turn-based strategy game with many similarities to Warlords and Master of Magic, but not quite like any one of these, or any other game for that matter, with considerable depth hiding behind a façade of simplistic visuals.

The player controls a kingdom in the world of Elysium, and strives to become the sole ruler of the land. Naturally, there are other pretenders that must be taken care of before this goal may be accomplished. A game may be played on a pre-set scenario, or on a completely random map that is generated based on several choices offered to the player that determine both the natural and the socio-political landscape of the world that will be created.

The map consists of square tiles, each representing a different kind of terrain and possibly a place, ranging from simple farms to towns and castles, to various mines and other places. Armies controlled by the players use action points to move around, with different terrain types taking a different amount of points to traverse. Seasons also play a role, as winter is not the best time for long marches for example. Combat is entirely automated, as in Warlords, but is more complex and will factor in several variables like a unit's condition, or special abilities and spells. In addition to AI and human players, there are neutral monsters and other characters wandering around, which may be attacked but are not always hostile. Some may join the player's armies.

The economy is simple on the surface: the more assets you have, like farms, towns or mines, the more income you get. Upkeep is not factored in, but the amount of tax may be adjusted, and seasons affect income as well. High taxes will also result in the subjects becoming unhappy and prone to revolts.

What is truly astounding is the number of different character classes the player may choose as the leader of their kingdom. The whopping nineteen archetypes are divided into four large groups: Warlord, Mage, Priest and Non-Human, each with several options. Each character has essentially their own gameplay style and tricks, with some being fairly straightforward, like the Baron, and some exceedingly complex, like the Necromancer.

Conquest of Elysium II was developed for multiple platforms and initially sold as shareware, but since 2007 the free full version may be downloaded from the developer's site. This version runs natively in Windows. 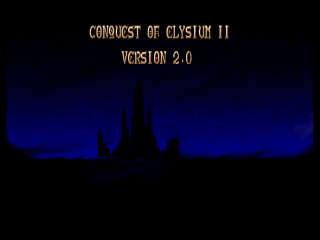