You can play Cyberbox II on this website so you don't need to download and install the game on your computer. We recommend to use Google Chrome when playing DOS games online.

Cyberbox II is the sequel to the original CyberBox, but is a vastly different game build around the same core mechanics of pushing boxes. If in CyberBox, the goal of each level was to reach the exit, here every levels is broken down into several different puzzles, which combine most elements from the first game with new additions, such as icy floors that make the player and boxes slide in the direction of their original movement, or one-way passages through solid walls.

Because of the much higher complexity of the new levels, the player is now allowed to save the game at any time. Cyberbox II comes with three level sets with increasing difficulty, and allows users to create and play their own levels - there is no special editor, but levels can be made in any text editor of the user's choice.

Cyberbox II is distributed as shareware. The unregistered version is a complete game, but registration entitles users to tech support and additional bonuses, including the source code to all games made by Doug Beeferman. 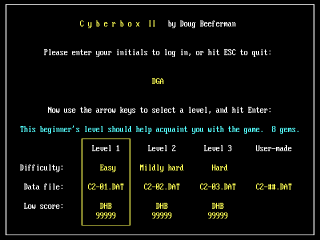