You can play CyberBykes on this website so you don't need to download and install the game on your computer. We recommend to use Google Chrome when playing DOS games online.

CyberBykes is a fast-paced shooter game where you remotely control an armed bike (somewhat similar to the Nod Recon Bike from Command & Conquer) running missions for the global government of the future to secure valuable secrets from falling into wrong hands.

Although CyberBykes came out in 1995, it looks like an artifact from an earlier era where untextured true 3D environments were more common. However it is allso one of the early games to include support for VR glasses and capitalise on that feature.

The demo includes two missions. The full version would also allow the user to edit and create new levels. 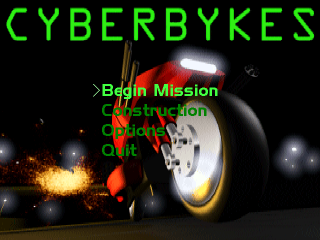